Drones are not only filling the air but also flooding the market these days. If you pick any tech magazine, you will see various new companies claiming to offer the smallest drone, most advanced flying machine, best aerial camera and so on. There were several drones launched in the year that went by, but the DJI Mavic Pro set the bar really high.

Until now, the small drones mostly came at the price of camera quality and battery life. The flight range and features were also compromised, but the DJI Mavic Pro promises to write a new chapter! Let’s find out what makes it so sought after.

Despite being one of the smallest and most portable drones you can buy in the market today, the DJI Mavic Pro offer good camera quality, flight range, and battery life that can be compared with drones that are twice its size. To put in simple terms, it’s like making a shift from heavy and big desktop computers to sleek and compact laptops that promise better performance!

The small and compact body design is a work of intelligence. There are four wings that can be neatly folded to the sides and the rotors can also be folded to make the device highly portable. You get the added benefit to keep the rotors on at all times without having to attach and detach them as with other serious camera drones. So, this drone is always ready and raring to fly!

The remote is much smaller than rival products and it features a small LCD screen that enables you to fly the drone without using the app. You can see the altitude, distance and direction displayed on the screen. It also gives a warning message if the Mavic senses high winds commencing towards it, or when it gets a little too far away from home.

This is a new feature that allows you to fly the Mavic without a remote. You just need to toggle a little switch that shifts it from remote mode to WiFi mode and you are good to go! Connect to your phone’s WiFi connection and control this beast using the DJI app. This option works well when you want a shorter flight range.

Get Better with Double Control

If you want a more satisfying experience, you can combine the remote control with your mobile phone. This gives you double confidence and dual control while flying the Mavic Pro. You can adjust camera settings to see live video feed on your mobile camera and the remote gives you a better control of the flight. Hence, using both the remote and app control can deliver amazing results!

Mavic’s components and software have a lot in common with DJI’s Phantom. The optical flow sensors are downward facing towards the ground. The camera offers the same 4K video and 12 megapixel picture quality, but the only difference is that the camera size is comparatively smaller.

They also have the same forward facing optimal sensors that helps in detecting any obstacles in the way, and thus avoid any sudden crashes. The gesture control feature allows you to command the drone to face towards you and take a picture when you wave your arms at it.

The foldable design of the drone makes it easier to carry it with you wherever you go. Just a few years ago, it was unthinkable to be able to carry a drone with such capabilities with you in your travel bag. But thanks to DJI’s team, drone enthusiasts can now carry their UAV with them wherever they go! Outdoor photography can be taken to new heights with this advanced drone that is easy to use and control.

The small and compact form of the Mavic Pro does not come in the way of its flight range. It boasts a speed of 40 miles per hour, and you can enjoy clear and crisp live video stream even from a distance of 7 kilometers. However, when pushing the Mavic Pro to its extreme limits, you must remember that the drone has much smaller motors and rotors, so be careful!

Downsides of the DJI Mavic Pro:

The DJI Mavic Pro treats focus differently than Phantom which means that the camera does not focus automatically and you will need to do this manually. This can get tricky if you are controlling with your remote or your smartphone’s battery is critical.

We would have liked the Mavic Pro to be waterproof given the fact that it can be used instantly without any extra setup time. Unfortunately, it is not waterproof hence you must avoid rainwater, puddles, etc.

Although you get both remote and WiFi control, there is dramatic loss in flight range and speed when you try to control the drone using the app.

The audio quality of the Mavic Pro is not good so you may simply mute it.

You will need flat surface for the Mavic Pro to take off as when you place it in an unfolded condition, there are short legs that keep the body only slightly off the ground. So, tall grasses, bumpy ground or uneven flooring will be obstacles when trying to fly the drone.

Overall, the DJI Mavic Pro is a wonderful foldable drone for the beginners. The compact and small size gives it an edge over the bigger drones that are difficult to set up and carry from one location to another. The professional filmmakers and photographers may find the Mavic lacking in a few aspects although they will be able to make the most of the software, programs and advanced features.

The average and less demanding drone enthusiasts will find the Mavic Pro truly impressive as it is an improvement over the previous models. It fulfills a beginner’s dream of taking high quality aerial images and videos.  When it comes to power and performance, the DJI Mavic Pro stands above competition and makes a recommended buy! 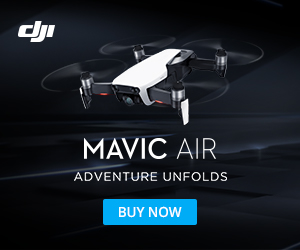